I’m very busy this morning but not too busy to share with you this picture of FLOTUS Michelle Obama’s fashion sense at her final state dinner as a first lady. She is wearing an Atelier Versace gown and simply looks sensational. Her choice of fashion over the years has really set her apart from the majority of first ladies that we’ve seen. She will certainly go down in history as one of the best. If I had time I would post some of her other looks…. but I don’t. Enjoy your day!!!

The alarm is scheduled

I’ll get up in just…

The abundance of traffic

That I have not yet

I drift back off to sleep and then…

So serene, so melodic,

I wake up again…

This is one of those must watch videos. Meet 106 year old Virginia McLaurin. Mrs. McLaurin was born in 1910 when William Taft was president.  She was married at the tender age of 14 and widowed at 17.  She has lived through 18 American presidents.

Two years ago in 2014, McLaurin received an award in her hometown, Washington, D.C. for volunteering. She spends that time with students who have mental disabilities. When she was given the award, she indicated to a reporter that her one wish was to meet the President of The United States. It took two years but she was invited to The White House this year for Black History Month.

McLaurin was so elated to see President Obama and The First Lady that she broke out in a dance.  This is truly a Black History Moment.

“I always tell people, live the best they know how,” she said. “Don’t steal. Don’t cheat.”

Bedecked in a hard-to-miss canary yellow, Serena began her quest to defend her Australian Open title.  Her opponent 24 year old, Camila Giorgi wasn’t quite enough to hold off the powerful younger sister of tennis great, Venus Williams.  Serena managed to capture three out of four grand slams in the 2015 season and she certainly seems poised to put on a repeat performance in 2016.  Williams is one grand slam away from tying Steffi Graf’s  historic record. Graf has the most Grand Slams of the Open era with 22.

Serena held off the Italian, Giorgi by beating her in two sets 6-4, 7-5.  I’ll keep you updated on her progress through this tournament.

4 In that day you will say:

“Give praise to the Lord, proclaim his name; make known among the nations what he has done, and proclaim that his name is exalted.”

https://www.youtube.com/watch?feature=player_detailpage&v=PaGQA_ryKvU My thanks to loyal reader A. Renae for sending me this video.  It is Georgia Mass Choir singing “Look Where He Brought Me From”.  The truth is: we really don’t have to look very far.  We are often bombarded with the storms of life and God has a way of protecting us because HE alone is sovereign.  What that means is that He is all-seeing, all knowing, superior, matchless, and the list goes on and on.  HE has our best interests at heart and HE takes us from glory to glory.  This is a topic that I can talk about for a while… but I won’t.  Just know that he has indeed brought us all from a mighty long way and he has major plans for each one of us.  Hopefully you are inspired to trust in Him alone.  Enjoy your Mid-Week Inspiration!

The Haves And Have Nots Season 4 will begin on June 30, 2015.  For all of you that are ready and waiting, I’m posting a clip of the upcoming season. Also, check out the season 3 recap so you can be reminded of all that happened to get us to this point.  Get ready, Get set, Go………………………… 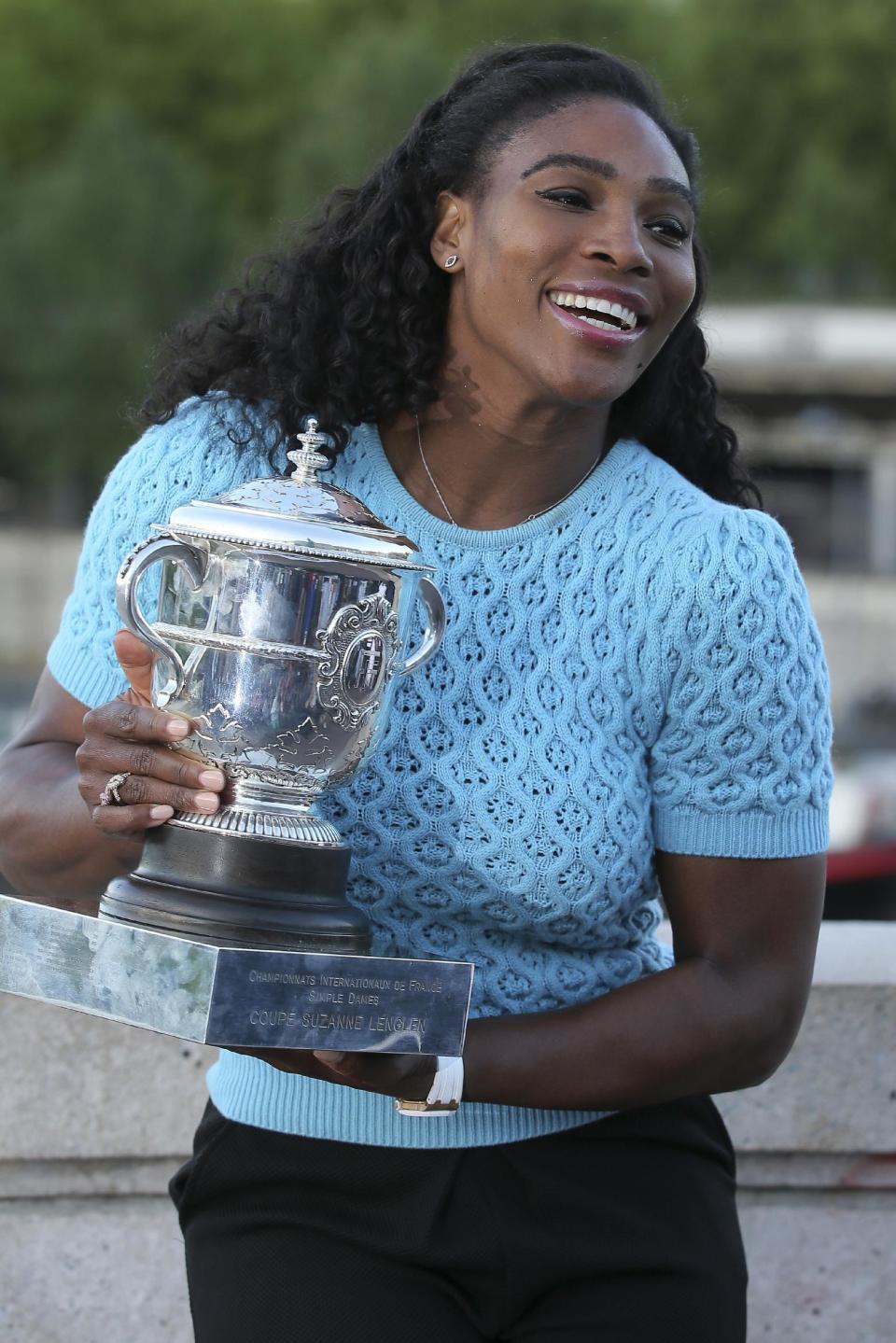 Hours before American Pharoah ran his way into history with the Triple Crown, Serena Williams inched her way closer to history with her third time win of the French Open.  This was William’s 20th career major win and three major wins away from overtaking Steffi Graff as the best women’s tennis player in the open era.

Serena has had to fight off many opponents to get to this point in her storied career.

”It’s hard. I need to sit down and, like, rank them,” Williams told a small group of reporters Saturday evening after becoming the third player in tennis history to get No. 20. ”This is up there, because I was not at my best.”

She had even considered pulling out of this tournament due to an illness that left her coughing and throwing up during matches.  Williams had to come from behind (2-0) in the third set before taking the last six games.  In four of her other matches, she lost the 1st set before battling back to make it to the finals at Roland Garros.

If you’ve ever watcher her play, you know that she is a force to be reckoned with for many years to come.  For all intents and purposed, I believe, she is in fact the best women’s tennis player ever.  Only time will tell but from the looks of things, it won’t be much more time before we will know for sure.

Yesterday was the day set aside for lovers… Valentine’s Day 2015.  In our haste to express love to our loved ones, I’m hoping that the ultimate love was not overlooked.  There is no greater love than the love that God has for us.

John 3:16 New King James Version (NKJV)  16 For God so loved the world that He gave His only begotten Son, that whoever believes in Him should not perish but have everlasting life.

This song is by Canton Jones and it really says it best as it eloquently asks the question:  How are you going to sing/talk about love… without talking about me?”

That reminds me of the day that I was at work and this young lady walked by me and she was singing a love song.  I said to her:  “you don’t know a thing about love”.  She stopped in her tracks and turned to me and said:  “anyone who knows God, knows love.”

So, while you are getting dressed today, dress up your spirit as well.

If you’ve visited this site for any length of time, you already know that I’m a big fan of reality tv. Recently, I watched the fiery reunion for the Real Housewives of Atlanta (Part 1). In the clip above Porsha Williams, the granddaughter of civil rights leader Hosea Williams, was provoked by Kenya Moore (former Miss America). Porsha responded by dragging Kenya across the stage. The women on The View discussed this incident and in my opinion, they got it right.
Sometimes people get just what they deserve and Kenya was on the receiving end… just what she deserved. Sure, here at studiotj, every attempt is made to keep it positive and I’m positive… that Kenya got just what she deserved. Check out the clip below and let me know what you think.

Yesterday I attended an event in downtown Atlanta for Dress for Success Atlanta. This organization prides itself in empowering disadvantaged women as they prepare themselves for career improvement. They have in fact launched a Going Places Network by Walmart. You can find out more information by going to their website: dressforsuccess.org/Atlanta

Check out this excerpt from their website:
“The Going Places Network by Walmart helps unemployed and under-employed Dress for Success clients gain professional skills, accelerate their job search and build confidence through weekly training sessions, one-on-one career coaching and networking in a supportive environment. This program was first piloted in New York City in 2009 in response to the challenging economic climate and implemented last year by several other affiliates.”
The topic of the meeting yesterday was communication and Janet Andrews, District 44 Governor for Toastmasters International was brought in as the keynote speaker. Toastmasters is an organization that helps to hone individuals’ public speaking and leadership skills. I am a member of Toastmasters and I love this organization I was able to present several table topics to the enthusiastic crowd. You can learn more information about Toastmasters by going to toastmasters.org I have been in talks with Janet Thornton of the Dress for Success Atlanta organization about beginning a Toastmasters club to accent what they are already doing. Here are some of the pictures from the event.

Janet Thornton, in the middle – in white – Dress for Success event organizer