This coming weekend is one of the most anticipated weekends for boxing fans.  Floyd Mayweather (47W 0L 0D 26KOs) vs. Manny Pacquiao (57W 5L 2D 38KOs) fight is front and center for the weekend and many will be watching.  Before you start asking, I think Mayweather is going to handle Pacquiao with no major problem.  Pacquiao may give him a good fight but in the end I think Mayweather will definitely prevail.  Jamie Foxx, who’s starring as Mike Tyson in an upcoming biopic, is going to sing the National Anthem before the fight begins.  Foxx is a big boxing fan and if you remember, he starred as Muhammad Ali’s right hand man, Drew Bundini, in the film “Ali”
Jamie Foxx also sang “America the Beautiful” before the Pacquiao vs. Mosley fight in 2011.  check him out singing below.  Also, let me know who you think is going to win…

This post is really great and I wanted to share it with my readers. I hope you find it as inspiring as I do and I truly hope it motivates someone to take a closer look at themselves. There is soooooo much more I can say about this post but I’ll let the words speak for themselves.

Relate: A while back I was eating at in a restaurant when from the booth behind me I overheard snippets of a conversation that caught my interest. Two guys who worked at the same place were sitting there talking about a third co-worker. That third guy was apparently a Christian. One of the two men said, “He’s practically a saint.” The other one replied, “I don’t want a saint. I want a good employee.” The conversation moved on but my mind rolled around that last statement. Since when did a good Christian not automatically equate with a good employee? Unfortunately, I’ve met a few examples that fit the bill. Even worse, I’ve been that example a few times in my past. I have heard the saying before, “He is so heavenly minded that…

Check out this track by Erica Campbell and let me know what you think.  Some are calling this music (TRAP GOSPEL) controversial because it resembles secular club music too much for gospel purists.  I guess these are some of the same people who took issue with Kirk Franklin when he came out with “Stomp”.  I don’t think that any of us can question the heart of another person and how they want to praise God.  In the words of another secular artist, Tamar Braxton, “GET YOUR LIFE”!

I like this video because it is so thought-provoking.  Who do some of us think we are, really?  This is another one o those social experiments just to see how a person would react in a particular situation. In this instance, a “homeless” man is sitting on the street trying to “give” money to people as they pass by.  The reactions are… well stunning in most instances.  Watch and see for yourself.  Let me know what you think.  How would you react if a “homeless person” gave you money?

This is soooooooo sad. This is the kind of devastation that most of us cannot fathom. My heart hoes out to all of these people and their loved ones. Just consider how very blessed we are that this

Our prayers are with the people in Nepal, Tibet, Bangladesh, India and surrounding South Asian regions devastated by one of the worst earthquakes to ever strike the area.

It was the worst tremor to hit the poor South Asian nation in over 80 years.
At least 1,130 people were confirmed dead across Nepal, according to the police. Another 34 were killed in India, 12 in Tibet and two in Bangladesh.

It was a few minutes… 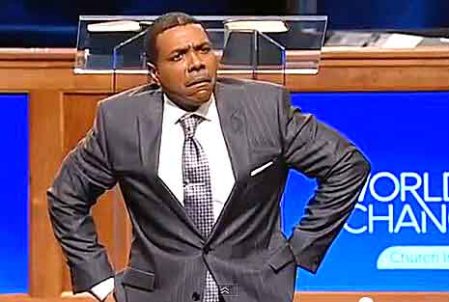 I really have no words for this comical dose of spiritual manipulation that’s served on a  platter of “the devil’s trying to discredit me”.  Sometimes people USE church for the wrong thing and that’s to manipulate money out of the parishioner’s pockets.

It’s been about a month since televangelist Creflo Dollar made headlines after his campaign for supporters to buy him a $65 million dollar plane. “If I want to believe God for a $65 million plane, you cannot stop me,” Dollar told his followers. “You cannot stop me from dreaming. I’m gonna dream until Jesus comes.”

Below is a video from his church showing Dollar blasting his critics of his short-lived campaign to raise the $65 million dollars for his new jet.

It is funny how things unfold in life sometimes. I was thinking earlier about what I could possibly post for a mid-week inspiration.  Well… as I went to my inbox, A Renae had sent me part two of Timothy Wright and Myrna Summer singing “We’re Gonna Make It”.  I am also including part one for those of us who need a double dose.  Also, here’s the verse of the day that I received:

20 For the invisible things of him from the creation of the world are clearly seen, being understood by the things that are made, even his eternal power and Godhead; so that they are without excuse:

Hope you have a wonderful day!

Like Loading...
This entire thing with Bobbi Kristina Brown’s current medical condition is one big Hot mess and has been for quite some time now.The daughter of Whitney Houston and Bobby Brown was taken to a hospital after she was found unresponsive in a bathtub at her home in Atlanta on January 31.

Above in the video, Bobbi Kristina appears with Whitney in London.

Doctors placed her in a medically induced coma and since then she has been fighting for her life.  Let’s fast forward to this past weekend.  While performing at a concert in Texas her father… Bobby Brown told the crowd at the Verizon Center in Dallas, TX,

“Bobbi is awake…she is watching me.”  Of course the crowd exploded  and many questions/concerns emerged.

In a statement to the media Bobby Brown’s lawyer explains,

“Bobbi Kristina’s condition has changed since moving from Emory University Hospital and there has been improvement. Doctors have indicated that she will have a long life.”

“However, Bobbi Kristina is presently embarking on a rehabilitation process and the quality of her life will not be known for years to come.”

“I have just returned from visiting my granddaughter Bobbi Kristina in the hospital and while she is no longer in a medically induced coma she has a tracheotomy and according to the doctors she has global and irreversible brain damage and remains unresponsive.”

“[Bobby Brown’s] statements were not accurate. She remains unresponsive.”

As you can see, this is definitely a bit of mass confusion(a big mess).  Why would Bobby Brown be so irresponsible as to tell the crowd that his daughter was “awake and watching over him”?  Was he just speaking figuratively or wishful thinking?  You be the judge and send me your comments.  I’m just hoping for the best.

A baby born pregnant with twins?  When I first saw this, I thought for sure that this must be one of those made-up tabloid stories.  After reading it an looking further into the story, I found it to be quite true.  The rare condition is called fetus-in-fetu, and fewer than 200 cases have been documented to date.
According to a report in the Hong Kong Medical Journal, when the little girl was born (at Queen Elizabeth Hospital in Hong Kong in 2010) doctors originally thought that she had two tumors in her abdomen.  They were quite surprised to find that there were two fetuses instead.  As a matter of fact, the fetuses were quite developed.  They each had a spine, intestines, bones with bone marrow, “primitive” brain matter, an anus, a rib cage and an umbilical cord.  How did the little girl get pregnant? “Since it is impossible for the little girl to have conceived the pregnancy on her own, the fertilization of the twin fetuses, of course, belongs to her parents, which has gone to the wrong place,” Dr. Yu Kai-man told the South China Morning Post.  At three weeks old, the baby underwent surgery to remove the twins.  The twins, according to reports, had gestated up to 10 weeks.