After months of drama, Bobbi Kristina,  is dead at the age of 22.  Bobbi Kristina, Whitney Houston and Bobby Brown’s only daughter, was found face down in a bath tub  just days before the third anniversary of mother Whitney Houston’s similar death.  She had been placed in a medically induced coma apparently due to some swelling in the brain.  The cause of her collapse has yet to be determined.

It has been almost six months since she the bathtub incident and many have speculated about the cause.  All of that is irrelevant at this time and hopefully they will let her rest in peace.  Bobbi Kristina was surrounded by her family, at Peachtree Christian Hospice in Duluth, Georgia when she died.

Like Loading...
This entire thing with Bobbi Kristina Brown’s current medical condition is one big Hot mess and has been for quite some time now.The daughter of Whitney Houston and Bobby Brown was taken to a hospital after she was found unresponsive in a bathtub at her home in Atlanta on January 31.

Above in the video, Bobbi Kristina appears with Whitney in London.

Doctors placed her in a medically induced coma and since then she has been fighting for her life.  Let’s fast forward to this past weekend.  While performing at a concert in Texas her father… Bobby Brown told the crowd at the Verizon Center in Dallas, TX,

“Bobbi is awake…she is watching me.”  Of course the crowd exploded  and many questions/concerns emerged.

In a statement to the media Bobby Brown’s lawyer explains,

“Bobbi Kristina’s condition has changed since moving from Emory University Hospital and there has been improvement. Doctors have indicated that she will have a long life.”

“However, Bobbi Kristina is presently embarking on a rehabilitation process and the quality of her life will not be known for years to come.”

“I have just returned from visiting my granddaughter Bobbi Kristina in the hospital and while she is no longer in a medically induced coma she has a tracheotomy and according to the doctors she has global and irreversible brain damage and remains unresponsive.”

“[Bobby Brown’s] statements were not accurate. She remains unresponsive.”

As you can see, this is definitely a bit of mass confusion(a big mess).  Why would Bobby Brown be so irresponsible as to tell the crowd that his daughter was “awake and watching over him”?  Was he just speaking figuratively or wishful thinking?  You be the judge and send me your comments.  I’m just hoping for the best. 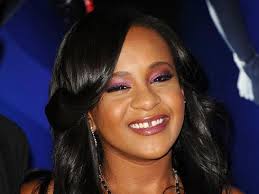 One thing about life is that you can’t write anything better than what happens every day in this life.  This whole debacle with the daughter Bobby Brown and the late, iconic Whitney Houston gets more and more interesting daily:  Check out what AOL is reporting on their website today:

Also information has come out about the birthday party that Bobby Brown had the other night on his birthday (while his daughter is on life-support).  There was a fight that took place and 911 had to be called on one of his sisters.  This sounds real classy right? lol…
” New information about Bobbi Kristina Brown reveal she may have been dealing with numerous personal problems leading up to her hospitalization.

The daughter of Whitney Houston and Bobby Brown was taken to a hospital last week after she was found unresponsive in a bathtub at her home in Atlanta on January 31.

Doctors placed her in a medically induced coma and a statement from the Houston family this week said she was fighting for her life.

Law enforcement sources told TMZ she was already in trouble with the law before the incident – and police believe foul play may have been involved.

An arrest warrant was issued for the 21-year-old just days before she was found unconscious and law enforcement sources say she had injuries that lead them to believe foul play may be involved.

Brown was previously hospitalized for “stress and anxiety” shortly after her mom’s death. Authorities searched the home after she was taken to the hospital but didn’t find any drugs.

They’re also looking into a possible altercation more than an hour before she was found. The main suspect is her boyfriend.

Details of Bobbi’s condition are still scarce but she remains on life support.”

Bobbi Kristina, Whitney Houston and Bobby Brown’s daughter, was found face down in a bath tub yesterday just days before the third anniversary of mother Whitney Houston’s similar death.  She has been placed in a medically induced coma apparently due to some swelling in the brain.  According to sources, she was found by her husband, Nick Gordon, who began CPR before the police and paramedics arrived.

Reports are indicating that a police search found no drugs in the home (the same home they shared with Whitney).  The cause of her collapse has yet to be determined.  Her condition currently has been described as stable.

Family members going to the hospital.

The condo in Roswell, GA where she lives with husband Nick Gordon