If this were my child in this video, I would be in some very serious trouble.  In life we are taught to be law-abiding and for the most part, I think most people are.  But… after seeing this disturbing video, God himself would have to grab and restrain me from reaching out to touch this particular officer in some manner.

Okay, before I get too far ahead of myself, let me give you more information.  At Reach Partnership School, a middle school in Baltimore, Maryland, a police officer was caught on camera slapping and kicking a student.  At this time, the head of the Baltimore school police force and the two officers seen in this video are on administrative leave.  This action was taken after the video became public.  No word yet as to what happened prior to the physical altercation but I can assure you that attorneys are lined up to try to represent this young man.  The teen and his parents are being represented at this time by attorney Lauren Geisser.  Reports indicate that Geisser said she has documentation identifying the teen as a tenth grader at the school.  Further reports indicate that the student suffered face and rib injuries as a result of this assault by the very unprofessional cop.  Geisser has been quoted as saying “the boy had a right to be at the school where he was an enrolled student.  With respect to refusing to leave the school, the student didn’t want to leave the school where he had a right to attend.”

“I am completely appalled and disappointed by what is depicted in the video,” the school system’s CEO, Gregory Thornton, said in the statement. “Our school police officers are entrusted with ensuring the safety of our students and staff, and I know that most of them take this job seriously while maintaining a high level of professionalism. The behavior in the video is completely unacceptable.”

You’ve got to share your thoughts on this one.  Tell me what you think.

With high school and college graduations rapidly approaching, I thought it would be good to share with you the success of some of these young people.  Above is a video of a young man that someone told me about at work.  He graduated in 2010 and was the valedictorian of his class.  His speech is awesome and will bring you to tears.  He received over one million dollars in scholarships.  A few current students are listed below and all of them have been accepted into all eight Ivy League schools.

A Minnesota high school student has achieved the rare honor of being accepted by all 8 Ivy League schools, plus more highly accredited colleges.

“I was very surprised,” Munira Khalif, senior at Mounds Park Academy, said. “The best part for me was being able to call family members on the phone and to hear their excitement. This was truly a blessing from God.

A North Carolina student who was accepted into all eight Ivy League schools will have to make a tough choice and decide where he wants to attend college in the fall.

Victor Agbafe, a student at Cape Fear Academy in Wilmington, also could go to Stanford or Duke because he was accepted at those prestigious institutions as well.

Another high school student,  of Long Island, was also accepted into all eight Ivy League schools.

Ekeh, 18, was editor of his student paper and CEO of the Model UN.

He moved from moved from Nigeria to Long Island at the age of eight, got a 2270 on his SATs and also has plans to be a neurosurgeon so he can find an Alzheimer’s cure for his grandmother. 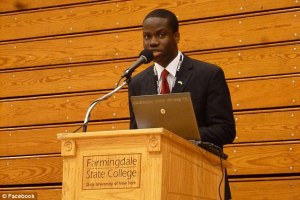