There are many activities that will happen today around the nation to celebrate the life of Dr. Martin Luther King Jr. There are speeches and programs scheduled. In and around the Atlanta area, there are many celebrations including a parade in McDonough, GA. Many people have the day off work. As has been said in the past: Instead of making this a day off, make it a day on for service to mankind. There are many things that one can do to serve others like… donating time at a local Boys and Girls Club, helping the elderly, feeding the homeless, etc. 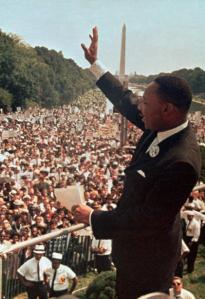 via AOL
ATLANTA (AP) — The nation will pause to remember Martin Luther King Jr. with parades, marches and service projects.

King was born Jan. 15, 1929, and the federal holiday is the third Monday in January. In Atlanta, a service will be held at Ebenezer Baptist Church, where King was pastor. In Memphis, Tenn., where King was assassinated, an audio recording of an interview with King will be played at the National Civil Rights Museum. The recording sheds new light on a phone call President John F. Kennedy made to King’s wife more than 50 years ago.